On April 17th Jaguar and I went on a bonding trip. I thought it would be nice to spend some time together after losing Diddy, and I needed some of that healing only the desert sun and rocks can provide. I found a cute little ranch where we could be surrounded by other animals. I should’ve known something was up because my car’s check engine light came on as I was loading up. I opted to get a rental car. Jaguar was by my side through the entire process and was so well behaved the whole time. It took us a few extra hours but we finally made our way.

Rancho Remuda was vibes alone. The donkeys and ponies greeted us as we arrived. I asked Jaguar if she was going to make some new friends and she was totally down. I have never seen her so excited and didn’t realize that she longed to be a ranch cat. She immediately busied herself taking in all the sights, smells and sounds, rubbing up against everything. Shortly after we arrived, I fed her, but there were so many flies in the house I took up her food and cracked a window. Moments later she hissed at me, she wanted her food, so I put it back down for her, and she started rubbing up against me as if to say thank you. I picked her up and gave her some kisses. (she had become slightly more affectionate since Diddy passed). I put her down to head out for a hike, thinking, even if she does go out the window, she’ll be ok.

I was out for maybe 3 hours and when I got back, Jaguar was nowhere to be found, but another cat came to the door. He was very loud and would meow at me every time I went out looking for her. I asked him to send her back but when it became morning and still no word from her I started to worry. So I went to search for her in the daylight and I found her body. She was lying overlooking the reservoir, untouched, with her eyes open wide. Her pupils were very dilated, so I assume it happened sometime that night, beneath the crescent moon and stars. But perhaps the thing that shocked me most, is that she was there in the open, not hiding at all.  There were no one around her, and no signs of foul play. It’s like she just laid down and died. I think she thought she was in heaven.

Hysterical, I called my mom. I was too distraught to think. She suggested I find the ranch owner and I have to say how grateful I am to Cybele and her ranch hand whose name escapes me now. I don’t know how I would have managed on my own. It was about 6:30 am when I waved Cybele down. “I need help!” I yelled across the yard to her. She was preparing her horses for a polo match. “What’s wrong?” she asked, garden hose in hand. “My cat died!” I was still on the phone with my mom. “What?!” she said in shock. “Yeah.” At this point I was wailing.

She came over to me and asked if she could give me a hug and if I wanted them to bury her there. It was so sweet and I will never forget the care she extended to me. I explained that I didn’t know what happened. “Was she old?” she asked. “14,” I replied. “That’s pretty old, they just don’t live long enough in comparison to us.” My cats certainly didn’t feel old, but they were definitely getting up there. “Maybe a heart attack.” Cybele speculated. “Sounds like she just really missed her brother.” I trusted her assessment.

I spent the whole day in and out of crying spells. It was like the whole ranch was in mourning too. The donkeys came to console me. I am so glad that I had the people, the animals and the nature of the ranch to hold me. Jaguar’s final resting spot is overlooking the horses and I take comfort knowing just how happy she was when I last saw her. 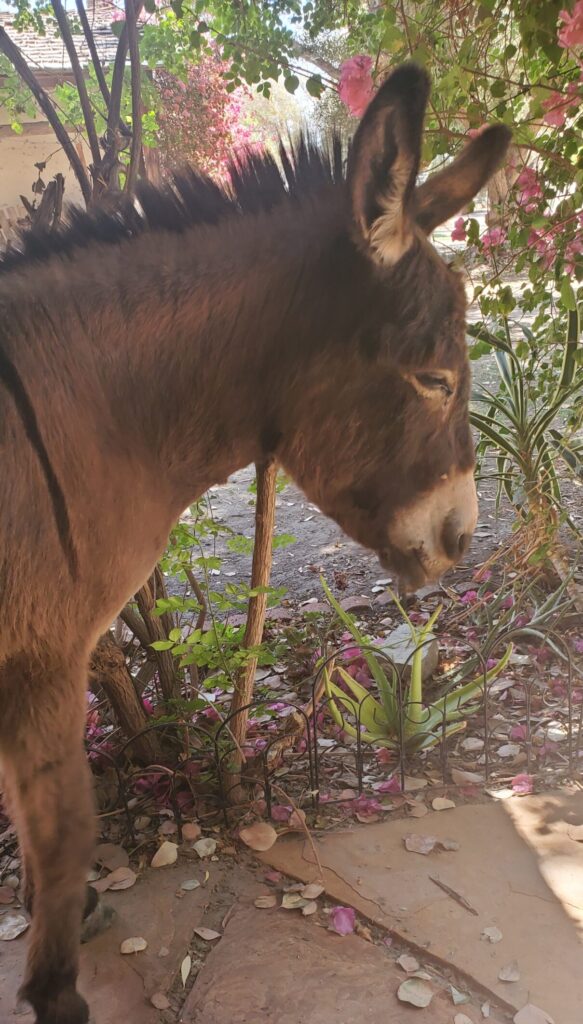 I couldn’t have written it better. Even the fact that I had to get a rental factored into this. Once I arrived home and returned the rental, my check engine light went off and hasn’t’ come on since (5 months later) *knocks on wood* And while I’m grateful that I don’t have to hold those last memories of her in my car or even in my home. Vibes alone, an epic farewell befitting the prissy princess she was.  A true diva until the very end. Rest in Peace to my sweet love Jaguar Puma Jones.